Casey Anthony In Talks To Star In Reality Show 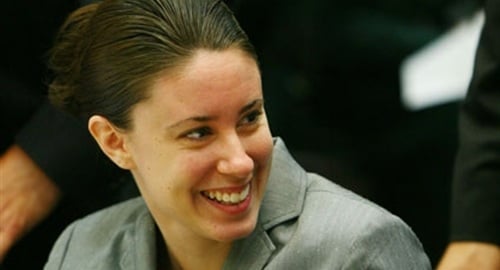 Just a few hours after being found “not guilty” of the murder of her 2-year-old daughter Caylee, Casey Anthony has reportedly signed with an agent and is in talks with various production companies to film a reality television show centered around her post-trial life.

Casey Anthony’s agent Marty Finklestein claims to have already received, “numerous extremely lucrative offers” to have Casey star in her own reality show. On top of the reality TV show Casey Anthony is reportedly going to be doing club appearances as soon as she is released from custody. Her club appearance tour tentatively titled “No Kids Allowed”, will kick off in Vegas at “Starlet Lounge” and will earn Casey an appearance fee in the “mid 5-figures”.

When asked if he was worried about a public backlash from Casey Anthony profiting from the tragedy of her’s daughter’s death, Casey’s agent Marty Finklestein replied,

“Who cares! If the American public did not become obsessed with Casey Anthony, then the prosecution would not of been pressured into going for the death penalty with a premeditated murder charge they had no hope of convicting on. Instead they would of charged Casey with negligent homicide and got an easy conviction.

So really it was the American people’s fascination that caused Casey Anthony to be set free. Now that same fascination is going to make both her and I filthy rich! What a country!”