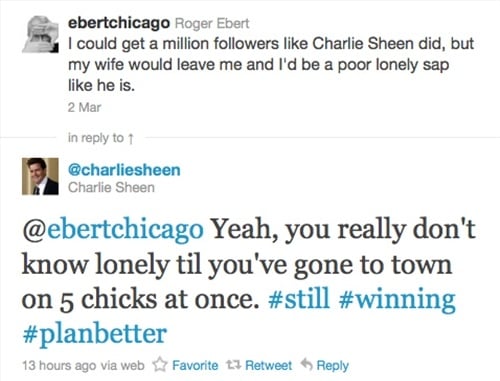 Renowned cocksman and honorary Muslim, Charlie Sheen took to his Twitter account to defend himself against slander from the freakishly deformed movie critic Roger Ebert.

As you can see in the Twitter exchange above, Ebert unfairly attacks Sheen, calling him lonely. Of course it is only through the evils of modern Western medicine and social media that Roger Ebert is even still able to express his opinion, considering Allah in his infinite wisdom inflicted his jaw with cancer.

Of course being the winner that he is Charlie Sheen easily outwits Roger Ebert by sarcastically tweeting back that banging 5 women at once sure is lonely. To which there was no response from Ebert, probably because his nurse maid is still wiping the dribble from his prosthetic chin.