George Clooney’s Up in the Air Promotes Hurtful Muslim Stereotypes 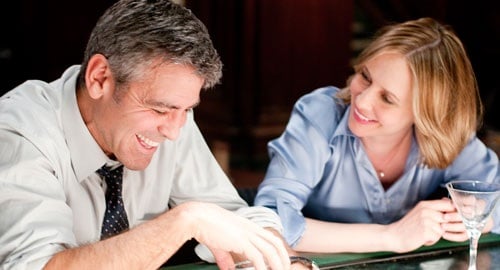 Recently I watched a bootleg copy of the new George Clooney film, Up In the Air. It’s been a long time since I’ve been so offended.

I found the film to be very unrealistic and extremely insulting. For example, George Clooney’s character spends most of his life traveling the U.S. via the commercial airlines. Inexplicably, not once in the entire film does he encounter an Islamic Fundamentalist trying to bring down the plane with an underwear bomb. In fact, the only Muslims depicted in the film were normal, average Americans who were just trying to live their lives. I wholeheartedly object to this common stereotype. Zionist-controlled Hollywood wouldn’t feel comfortable depicting all Asians as dry cleaners or all Mexicans as migrant workers, so why do they feel it’s OK to depict all Muslims as tolerant, peace loving people? I resent the implication. Some of us want to destroy the Jews and force the rest of the world to convert to Islam, thank you very much!

Another aspect of the film which I found insulting was the gratuitous nudity. At one point, the side of Vera Farmiga’s breast and part of her backside are exposed for at least three seconds. While I appreciate that the film depicts Western women as promiscuous whores, couldn’t the director have found a way to do this while still having his female characters clothed, preferably in burqas? For example, in the film, Clooney meets the female lead at a bar and immediately brings her back to his hotel room. The director could have just as easily had Clooney chastise the woman for not being chaperoned by a male relative, followed by a scene of her public flogging by the religious police. The same point would have been made, but without the nudity.

All and all, I give Up in the Air 15 out of 72 virgins. Skip this insulting, sinful smut.