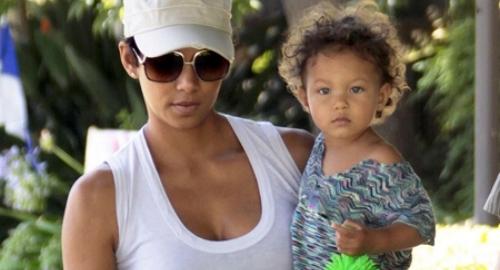 Halle Berry started a controversy earlier this week while being interviewed by Ebony magazine when she said the following about her baby with white male model Gabriel Aubry,

“I feel she’s Black. I’m Black and I’m her mother, and I believe in the one-drop theory.”

Of course the “one-drop theory” is the theory from back in the slave times (also known as “the good old days”) that if a child has even one drop of black blood in them then they are black and can be made into a slave.

A sound theory to be sure, but now Halle Berry is taking her race hating to the next level. In an interview with Jet magazine the Oscar winning actress says the following about her baby,

“My baby is a straight up n*gger and I don’t care who knows it. She just lays around the house sleeping all day. If I yell at her to get a job she starts crying. If that is not a n*gger then I don’t know what is.”

At the time of this articles publication the babies father Gabriel Aubry was unavailable for comment, but sources close to him have told us he is heartbroken about the news. “He just wished Halle would at least check the nappyness of their daughter’s hair and her propensity for grape drink before casting disparaging labels upon her” said a family friend.