Jesse James: He’s Not All Bad 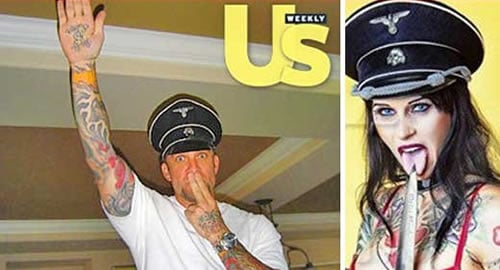 Say what you will about Jesse James, but he’s not all bad. For example, look at this picture of Jesse posing as Hitler.

Sure, he may have cheated on his wife with a bunch of whores. And yes, he will burn in hell for worshiping Jesus Christ instead of Allah, the one true god. But still, as this picture demonstrates, his heart is in the right place.

Don’t let the tattoos fool you. Jesse is an educated man who is just as concerned about the international Zionist conspiracy as we are. While I may not agree with him on everything, and I might cut his head off under most circumstances, it’s still good to find common ground in regard to our mutual hatred of the Jews.

It just goes to show that you have to look for the good in people.