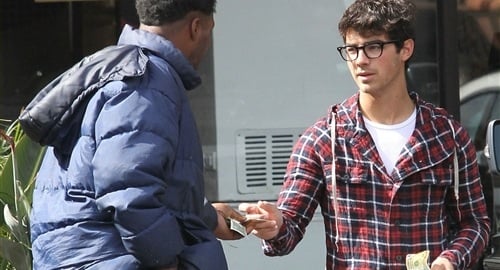 Joe Jonas was photographed handing a large black man money as he reaches into his pocket to produce something. What possible reason could Joe Jonas have for breaking the Jonas Brother oath of racial purity and interacting with a black man?

Was he contributing to the man’s college fund? Doubtful. Was he investing in the man’s sun glass kiosk at the mall? Not likely. Was he purchasing crack rock to smoke with his bottom bitch Tosha in the alley behind a Taco Bell. Probably!

Frankly, would anyone be surprised if Joe Jonas turned to drugs? It can not be easy for him being constantly referred to as “the ugly one”. Imagine having to grow up in the shadow of your big brother Kevin’s devastatingly handsome receding hair line Jew fro, pear shaped body, and lily white skin.

Joe Jonas may be entering a downward spiral of drugs, despair, and handjobs and I don’t think anyone can save him now. Let us hope he survives rock bottom and can battle his demons the right way.