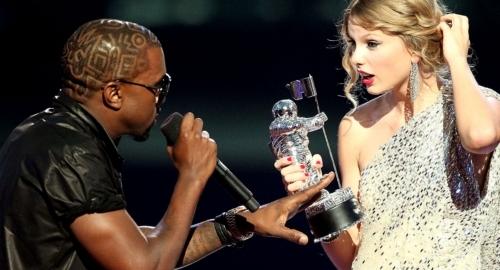 Taylor Swift owes Kanye West an apology. Last night at the MTV Video Music Awards Taylor Swift was given Beyonce’s award for “Best Female Video”, and refused to acknowledge the mistake. Courageously Kanye West jumped on stage and heroically wrestled the mic away from the 19-year-old hellcat.

Sorry Kanye but to say Beyonce’s “Single Ladies” is one of the best videos of all time is a gross understatement. That video is the single greatest achievement in the history of the world (and probably the whole universe).

Beyonce in a leotard doing a dance created by someone else back in the 70’s touched my soul like nothing ever has before! Not to mention the video is shot in black and white! Everyone knows anything shot in black and white is super artistic. Oh and don’t even get me started on the song! The repeated shouting of “All my single ladies!” is one of the most moving bits of music ever made period!

Beyonce not winning for “Best Female Video” was like 9/11ing the Holocaust. Kanye was the only person brave enough to take a stand, and for this he should be praised. Not only that but Taylor Swift was totally calling Kanye the N-word with her eyes. I demand that Taylor Swift apologizes to Kanye for acting like a spoiled self-entitled racist last night.