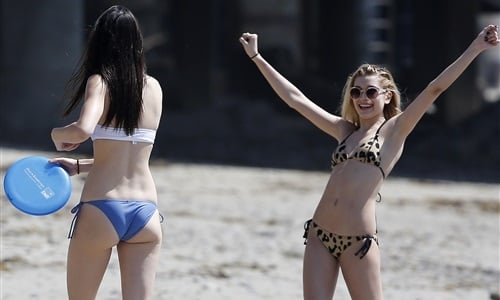 Kendall Jenner shows off her surprisingly frumpy teen ass while in a bikini on a beach in Malibu in the photos below.

As a half-Kardashian one would expect that Kendall Jenner’s hindquarters would be much plumper and fuller than what we are seeing in these bikini pics. Perhaps the fact that Kendall is one of the few non-coal burner race traitors in the Kardashian clan has something to do with her flat saggy posterior?

It would be a fascinating study in epigenetics to see if Kendall Jenner has not developed a bulbous backside because (unlike her sisters Kim, Kylie, and Khloe) she has no desire to become a single mother with a mongrel baby and thus doesn’t mess around with black guys. Certainly Kendall’s mother Kris would be more than happy to arrange for a group of blacks to run a train on her daughter to see if her ass will grow, as long as she gets to maintain the video rights.