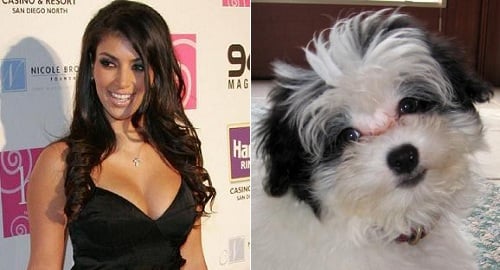 Kim Kardashian was arrested and accused of animal abuse after she allegedly stomped Reggie Bush’s beloved dog to death.

Miami police said they were called to Kardashian’s hotel Wednesday after a member of the cleaning staff brought the body of a dead dog to animal control officers. The dog, a small Pomeranian mix by the name of “Lil’ Reggie,” had severe head trauma. Kardashian had been watching the dog while Bush was in New York.

Police were told that Kardashian picked up the dog and threw it down on the ground after she learned that Reggie had been spotted with another woman at a New York nightclub. Authorities said Kardashian continued to stomp on the dog’s neck until it stopped moving. Guests of the hotel reported hearing Kardashian “laughing manically” around the time of the incident.

This is not Kardashian’s first encounter with animal abuse charges. In 2008, Kardashian was arrested in Compton after setting a baby raccoon on fire. Later that year authorities raided the Kardashian home and discovered hundreds of animals crowded together in foul-smelling conditions as well as dozens of puppy carcasses in a freezer.

Obviously Kim is a very sick girl. Let’s hope she gets the help she needs.