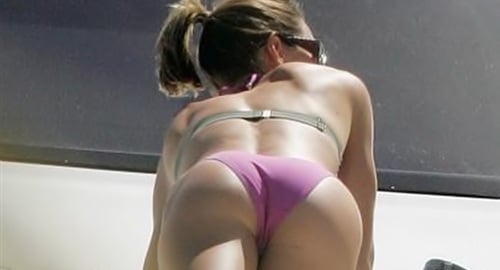 Remember when Jessica Biel was a big deal? No, well that is probably because she never was because she has no talent.

However, Jessica Biel is not completely unremarkable, she does have a pretty nice ass. Not nice enough to overcome her average looks and make her into a sex symbol like every Hollywood whore inspires to be.

Really her fatal mistake was not banging black guys. Black guys would have made Jessica a sex symbol because they do not care how busted a white chick’s face is as long as she has a thick butt.

Just look at Kim Kardashian. She looks like a damn tranny and probably has to wax her face every day to keep from getting her Armenian 5 O’clock shadow. Yet black guys have gotten so hyped up about her gigantic ass that they’ve catapulted her into being a sex symbol.

Let us take a moment and reflect on what could have been for Jessica Biel with these pictures of her ass in a tight bikinis.