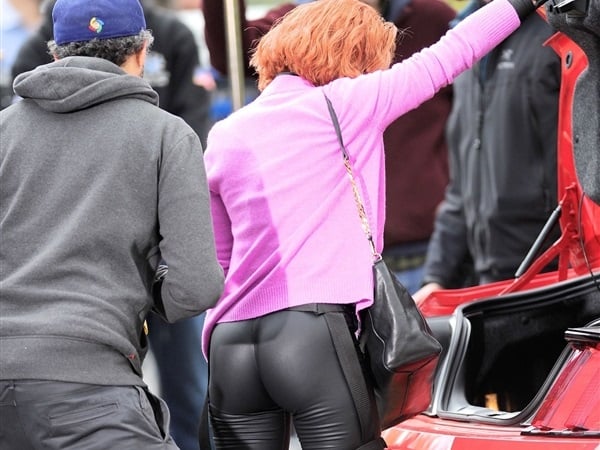 Scarlett Johansson shows off her dumpy ass in a pair of leather leggings while out filming a promotional skit for her new movie “The Avengers: Age of Ultron” in the photos below.

Obviously the depraved infidel movie going public like what they see in these pics, as “Avengers 2” brought in $187.7 million over the weekend, becoming the second biggest domestic box office in history.

If the kuffars think that seeing Scarlett Johansson’s flabby ass in some tights while she runs around after robots is worth hundreds of millions, then they would love paying to watch hours of video of my half-retarded mule Priscilla chasing after her own tail. For Priscilla is built just like Scarlett and the storyline behind why she chases her tail is just as deep and ripe with moral complexities as any Marvel film. And unlike the greedy Zionists in Hollywood, I will donate any profits I acquire from the film to charity, splitting the money equally between Al-Qaeda and Hamas.