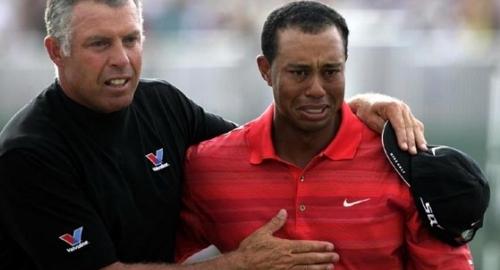 One of Tiger Woods “alleged” mistresses, Jamiee Grubbs, has released some texts and a voicemail she says are from Tiger. Here are the texts Woods allegedly sent to Grubbs,

“I will wear you out…when was the last time you got (bleeped)?”
*Hint the bleeped part is not “your pilates on”

“Send me something very naughty…Go to the bathroom and take (a picture).”
*The word “naughty” is open to interpretation. It is possible Tiger wanted her to take a picture of herself killing a cat or taking a dump.

If these texts weren’t damning enough for poor Tiger, the whore… I mean “mistress” also released a voicemail he left her warning her that his wife had gone through his phone, and begging her to take her name off her voicemail. Here is that voicemail…

Later in the evening Jaimee received a call from a blocked number which of course she answered. Jaimee claims the caller did not identify herself but said, “You know who this is because you’re f**king my husband.”

Jaimee responded, “that narrows it down to about 20 people could you be more specific?” (maybe she didn’t say that, but I bet she was thinking it)